When urban landscapes and coastal seascapes meet then a unique lifestyle ethos is the emergent result. Urban Coastal shares subtle, emotive, visual narratives about that ethos.

Urban Coastal is a modest body-of-work with nine black & white images organized as three triptychs;
The Urbanscape triptych is about the human-made world from inland to the coastal edge. The coastline draws people to it, but it also draws a sharp line between urbanscape and seascape. In Urbanscape the human drama dominates, and that drama incorporates some of the mystery and transcendence promised at seascape’s edge.

Fog is both its own triptych and a shared visual metaphor in all three triptychs. Fog lies over and through them all. Fog ties seascape and urbanscape together in a universal, subtle, emotive way. Fog is both subtle and dominate. On one level it is hardly there at all, yet its feeling defines the scene before us. Sometimes we feel more clearly in the fog.

In the Pier triptych, pier as physical architecture and metaphorical pathway transports its occupants out from the urbanscape into and over the seascape. A pier connects and transcends, out and above. A pier is a thing, a place, and a metaphor. As metaphor it is inspiration to transcend the juxtaposed worlds of urbanscape and seascape, making the experience of transcendence the common thread. We are invited and encouraged to transcend the physical for something deeper. On a pier we stroll, play, fish, and meditate.
Text and Narrative & Interpretive Digital Images © Kurt Lightfoot – all rights reserved 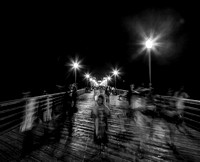